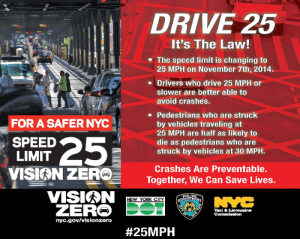 Speeding & Speed Limit Laws in NYC are being enforced now more than ever. The new maximum speed is reduced from 30 mph to 25 mph and applies to about 90% of the streets—essentially to all roads where there are no speed-limit signs.

A lowered default speed limit won’t affect highways or thoroughfares that have posted speed limits, such as West Street in Manhattan, Fort Hamilton Parkway in Brooklyn and Hylan Boulevard on Staten Island.

City transportation workers have prepared to hang the first batch of new 25 mph signs at gateways such as the Holland Tunnel and George Washington Bridge—all part of Mayor Bill de Blasio ’s Vision Zero campaign to improve traffic safety and end pedestrian deaths. It remains to be seen whether the city’s always-in-a-hurry drivers will ease off the gas.

Mr. De Blasio and other city officials were optimistic the new measure would work.“There’s a real consensus in this town that we need to have people drive more carefully, more safely and slower for the protection of our kids, our seniors,” the mayor said.

City police say they have stepped up enforcement this year. The New York Police Department has issued 94,677 speeding tickets as of Oct. 24, up 37% from 69,032 by the same time last year.

The city’s Department of Transportation, meanwhile, has deployed 25 speed-enforcement cameras near schools and plans to have 140 in place by the end of 2015. The agency is allowed to use the cameras only when school is in session.

“It’s not our goal to try and play gotcha. It’s our goal to make the streets safer,” said Polly Trottenberg, the city’s transportation commissioner.

Besides taming unsafe driving, Vision Zero would result in the redesign of New York City’s streets and intersections deemed dangerous for pedestrians.

To date 111 pedestrians have died on the city’s thoroughfares, down from 134 deaths at the same point last year, a Department of Transportation spokeswoman said.

To draw attention to the new speed limit, city transportation officials invited reporters and news photographers to the city’s shop in Queens where workers produce speed-limit, street-cleaning and other signs.

If you don’t find it above

What we have to say

With more than 15 years of experience, Our Brooklyn Towing Company has been serving Brooklyn NY and the surrounding areas including Queens, Bronx, Manhattan & Staten Island.